I am a European American citizen.  I say citizen but though it is legally true, I do not consider myself an American.  From my point of view, the only true Americans were the ones who were already here when my European predecessors arrived on this continent.  I struggle to live with the legacy of what my ancestors did to wrestle this land from those people and the indignity and arrogance of us now claiming it as ours.  Not only that but for us to have the audacity to tell more recent immigrants to “go home” is humiliating.  And to further our disgrace, we plundered the natural treasures of this land and even enslaved other people and brought them here to do our work for us.  And now we think we can claim the inheritance of their work? Their land?  And bully the rest of the world to follow our example? 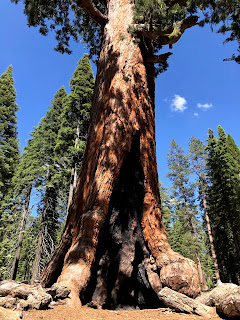 I recently took a road trip with my kids, my partner James and his kids to the Red Woods in California.  The rangers told us not to walk close to the roots of the massive sequoias because despite their mighty grandeur, over time it erodes the soil they need to survive.  So we walked the trails lightly in awe of these majestic beings, humbled by their amazing size and noble age.  I found myself wondering what our civilization would look like through their eyes.  I pondered all they have seen over the past 600 years and what wisdom they could share with us.

But I was torn abruptly from my reverie when I heard James yell out to a European family who was roughly kicking at the bark of a towering tree to get their footing on the roots for an instagram photo.  His voice was guttural, thundering, and threatening.  I put my arms around my kids and hung back.  I felt a twinge of discomfort for that family, making excuses in my mind that maybe they didn’t know better, didn’t understand English, or were just momentarily taken by the wonder of what they were witnessing that they weren’t thinking clearly.

But when I looked at James, proud Comanche descendent, I felt shame rise hot on my skin.  I could see the deep wound that image provoked in him and the warrior it awoke. Is that not the legacy of my people... Carelessly destroying on a momentary whim what was meticulously protected for thousands of years?  For what, a trinket to send home?  Do we have no sense of greater responsibility to the earth?  To our community?  To the Great Spirit that created us all?

Time collapsed.  Suddenly I felt no difference between those clueless European tourists and my own uninvited presence on this land.  My family has just been trespassing longer!  And as I looked around me at James and his children and my own children with Zapotec heritage, I was acutely aware that I was the only one in our group without legitimate ties to the earth we were walking. My lungs contracted, and I found it hard to breathe.

I felt a similar twinge as we crossed the El Paso checkpoint.  “Is everyone in the vehicle an American citizen?”  James’ “yes” rang hollow in my gut.  After years of living with an “undocumented immigrant,” crossing the borderlands still triggers unbearable anxiety.  Yet from where I stand, my ex had more right to claim this land than many of the people who indignantly ask the question.  Do I even believe in borders anymore?  Particularly ones that were won through bloodshed and deceit.  As I looked out over that vast desert, I couldn’t help but wonder who was risking their life at that very moment to cross it.  I could feel the pounding of their heart and the parched cotton dryness in their mouth.  And who can fathom the child who was right now crying out for the safety of her mother’s arms from which she was cruelly ripped in the name of some arbitrary laws written by and for my own forefathers who stole this land in the first place and never seemed particularly concerned about their own broken treaties.

It’s a heavy legacy I daily heave upon my shoulders and wear slung over me like a searing Scarlet Letter.  Yet to ever set it down feels like the pinnacle of unearned privilege.
Posted by Esperanza Rising at 8:57 AM No comments: 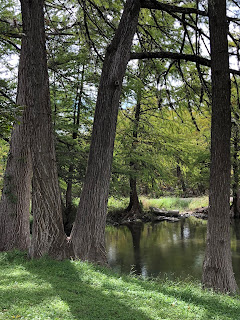 with protective branches
Not to be cut down
and used as a crutch
or a stump.
Fuck that Giving Tree bullshit,
just another way to indoctrinate and exploit
women and mothers throughout time.

Get off your ass, young man
and show some respect
for your MOTHER.
Fierce waves crashing in the sea
and blustering wind,
rain pouring down your face
as you cry bitter tears
grieving your failures and missteps.
Did you think you wouldn’t make them?
Own them.
So you can own your own power.

Then come to me,
face wet, muscles soft.
Come to me as the little boy
under all that posturing and rustling of feathers.

There we will meet,
two travelers
with open hearts.
And I will take you in my arms,
like the sweet runaway bunny
coming home.
There I am all tenderness
and love for you.
I will dry your tears
and remind you who you are.
Then send you on your way,
to try again.
Posted by Esperanza Rising at 7:01 PM No comments:

You can’t break this heart

I’m older than time
Even though I occasionally forget
I can tap back into Her womb
And lose my little self to the bigger one
Both mother and daughter
I sit here amazed
Who is it that watches me?
Who witnesses my thoughts,
Who acts?
Who feels the emotions
And who allows them to wash over clean?
I love the smile that inches across my face
As I dissolve in meditation
Realizing my story is one of many
Wrapping back through a deep, deep Herstory
But how do we go forward?

I am perched on the moment
Eager and tingling
What of me will be carried forward?
Through my daughter, my daughter’s daughter, my son?
How would their father carry on if I were not here?
Even he once said he would make the small details special because that is what I do.
Something settled inside me,
Maybe this is my imprint on time

Posted by Esperanza Rising at 1:24 PM No comments: