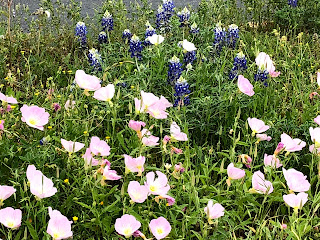 So many beautiful colors
dotting the fields
turning their delicate petals to the sun
seeking someone to see them,
hear them,
appreciate their rough edges.
Love is the water
that sends their roots sinking
in the rocky soil
anchoring them
for the days of drought
so they can withstand the wind
that will blow.
For it will blow.
There will be times
that test the soul.

Posted by Esperanza Rising at 2:02 PM No comments:

I used to cross the bridge from Reynosa to McAllen every day.  It was only 12 miles on the map but the divide was wider than the River.  Colors changed.  Rhythms shifted.  Walks, tones, and languages transformed.  Like entering another dimension, I would pass through this curtain into a new world where the depth of a glance contracted and deepened depending on which side of la frontera I was on.  McAllen with its clean, wide streets and new cars.  Modern highways sliced through cookie cutter chain restaurants (Applebees) so orderly and meticulously planned.  And Reynosa with her “Limpia y Hermosa” signs juxtaposed the floating trash and acidic smells of the canal.  There was the inch of dust that greeted me each morning on my windshield and the amputees rolling on their little pushcarts as I waited in la cola to cross the border.

My doctors chided me for living en el otro lado.  Too much pollution, too few regulations and dangerous levels of dust for my sensitive lungs.  And the stress of a two hours commute each day was no way to recuperate from my recent miscarriage and battle with double pneumonia and a collapsed lung.  And as I was also getting an emergency certification to teach in an underprivileged school while simultaneously managing to survive my first year teaching 125 lively 6th grade students.

I woke up each day at 4am and kissed my husband goodbye with the tenderness that the uncertainty of seeing each other again brings.  I rolled out of the warm covers of our air mattress to the shock of cold tile floors and poured myself out into the chilly dark outside.  I drove the long, lonely dirt road through the blackness of night to the international bridge.  Suddenly feeling blessed as I passed so many on foot headed to their jobs at the soulless maquiladoras for mere cents a day.

Being 2002 with the 9/11 threat still pulsatingly real, one time my clutch gave out due to the two hour pumping it endured as I crossed a high alert line trailing endlessly as far as you could see.  By the time I reached the border patrol station, I was popping it to get my big green Chevy truck to hop its way back to the States and straight to a Pep Boys.

The scariest moment was the night I woke up in the middle of the night with an asthma attack and my husband had to drive me to the border.  Not yet having his papers, he had to get out of the car with tears welling helplessly in his eyes as I took the wheel and drove myself gasping over the border straight to the emergency room in McAllen.

That’s when the doctors refused to release from the hospital unless I could verify that I was not headed back over the border.  Open lung biopsy and a trip to the Mayo Clinic in Minnesota, they would not sign my release forms unless I had a residence in the USA.  “Suicidal” they said.  So I moved temporarily into a long term Marriott near the hospital until I was strong enough to find my own apartment on this side of the border.  Back to work to support two apartments now, I doubled my efforts to get my husband over the border to be with me: humanitarian visa, a trip to DC, lawyers, and letters to US Senators & Representatives.  But rejection after rejection, the awful truth began to sink into my bones.  I was going to have to chose between risking my health in Mexico or giving up on  my husband and any hope of having children.

Diego was born 9 months later.  He met his dad for the first time when he was 3 weeks old at a bus station in Reynosa to the flash of a reporter’s camera.  The moment was forever engraved in black and white on the front page of the The San Antonio Express.  When Diego was three months old, I quit my job and packed up my US apartment with him tucked snuggly in his Bjorn.  I tossed the Chihuahua in my overstuffed Mazda and headed to Monterrey, México.  I found a job, a doctor and a trustworthy childcare with Diego in tow my first week in Monterrey and set about creating a new home and community for my newly united family.

A year later we were suddenly called to Ciudad Juarez.  My husband and I were finally able to laugh at the absurdity that our life had become and the tiny sliver of a chance that this would be any different from any of the other rejections.  However, that morning after a late night of reviewing our notes and checking our papers a 1000 times, my husband was suiting up in his three piece of humiliation.  Diego had pulled off all the sheets and pillows from the hotel beds when he suddenly rose up on two feet and walked to Polo for the first time.  It was Polo’s birthday, September 7th.

By Diego’s birthday October 4th, we were celebrating in South Padre with my parents!  Still giddy and shaking, sure at any moment we’d wake up from this dream, we made our way back to Austin.  Sitting in my glider in our new home I would sing “Amazing Grace” to Diego every night before bed as tears slid silently down my cheeks:

...Through many dangers, toils and snares
We have already come
T’was Grace that brought us safe thus far
And Grace will lead us home…

This morning, so many trials later, I was fixing breakfast, now a single mom in a new home.  I hear my now 12 year old Diego humming this tune as he worked on his homework at the kitchen table.  It all washed back over me like a wave splashing out of a distant past, slicing our arbitrary border of time.  Just like that, tears were slipping freshly down my cheeks as I realized I’m still being held safely in the arms of a truly Amazing Grace.
Posted by Esperanza Rising at 1:58 PM No comments: