I had a dream I was riding on the back of a black panther.
I could feel her strength like muscles rippling under the earth thrusting mountains into the air,

boulders and rocks tumbling as her padded feet silently brushed the ground.
We poured through the dark night, dried grass swishing, cool air in my face.

In Teotihuacan, Mexico they recently discovered a new tunnel under one of the pyramids.  They were looking for a buried king’s tomb that would finally “explain” the origins of this powerful city.  But instead they found two stone female statues, conch shells, pyrite mirrors, cat bones, obsidian knives and mercury.   It appeared to be a complete recreation of the outside world but underground, deep in the earth’s womb, beyond the touch of time, where it all began.

I’m reminded of the powerful Tonontzin surviving hidden in clear sight of the conquerors but shape shifting in the guise of the all compassionate Virgen de Guadalupe watching over us from Tepeyac.

It’s odd that I had to go back to Mexico to find myself again.  Gather up all the pieces that I somehow left behind, like lost change.  Not discovering the hole in my pocket until the bits of me had already unraveled, leaving me in tatters. 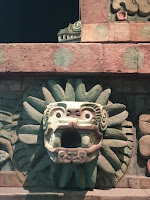 But now I find myself head bowed, reverently climbing the tiny little steps up the pyramid of the plumed serpent, Quetzalcoatl who bridges earth and sky, water and stone, dead and alive.  But instead of peering into the mouth of death to be digested and spit back out, I look into the face of my 28 year old self traipsing around these stones 17 years ago with my young dark skinned fiancé, giddy and affectionate, not a care in the world.  I had sold it all, thought I’d left it behind.  My heart throbs for that girl.  She has no idea of the weight she is about to inherit, have heaved on top of that small, feisty frame.

My skin tingles, feels porous.  I’ve crossed some portal where time has warped, somehow overlapped, folded in on itself.  I am peering through the lens of superimposed realities.  I am an observer, suddenly aware how carefree I once was!  So beautifully naïve.  Ashamed how I’ve judged her all these years, blaming her for what happened.  Like somehow I should have known.  Should have been wiser and chosen better.  But look at her pure spirit!  Her unshakable faith to follow love over the border, throw caution to the wind and plant herself like a wildflower wherever she lands.

I stand up from where I’ve unknowingly slunk to the ground.  Dust off the dirt, tiny stones still clinging to my pale skin.  Mouth open, brow furrowed.

Then like a thunderclap, my mind clears.  I’m giggling, laughing at myself.  Expecting a lashing, I got a hug!  How me.  My own worst enemy.  Humbled, I devotedly gather my little bits about me like a skirt and feel the wind lift this burden I’ve carried for far too long, suddenly aware it’s just been a case of mistaken identity.  This was never mine to bear in the first place!  Now I’m playfully peeling off gravity, reversing the aging process as I skip back down the steps.  Reclaiming my place in the universe.  Wondering why I ever forfeited it in the first place.

Throwing my double at the pyramid of the Moon

I begin to build my double from spit and memory.  She’s timid at first.  Not at all ready to be thrown.  In fact she begs me to carry her like a child.  I can feel her tiny hand in mine.  But I remember the poem I wrote at Ghost Ranch about my childhood, “I was formed in the shade of a sycamore…” so I start tossing in images of riding bareback in sticky, sweaty jeans.  Acknowledge and hold the terrified 17-year-old girl running alone through a southern Spanish city after being attacked in a park.   Smile at the defiant Wesleyan feminist.  Sit with the Sari clad young woman, peaceful in New York City at the feet of her guru. And I find I am falling in love with her, this woman I’ve been.  This woman I’ve become.  And my double is growing stronger as we walk.  By the end of the plaza, she’s now eager to fly.  And I am finally ready to LET her GO, breathe into that space again.  Like the end of a pregnancy when you know you can no longer hold your child in the safe dark womb.  Your belly stretches full term and is ready to know its own size again.

I’m finally untying the agreements that have kept me knotted up, shackled and bound.

I am learning to use venom as medicine.

I can finally see all of me and find I love her fiercely as she soars high above me!

My past continues to bleed into my present.  There is no longer a clear line defining the two like they teach you in school.  The veneer is dripping off ancient walls to finally reveal its true identity, and a deeper purpose.

Yes, I can see the thread now!  How all of these people I’ve been are all ME.  Thick painted layers peeling.  Churches built on pagan ruins.  Tenochtitlan lying dormant under Mexico City to be discovered by dynamite blasts for the metro.  Volcanoes erupting back to life, lava flowing, liquid fire.  IT IS TIME.

I stand before the blaze as it shoots into the sky.  Warrior goddesses tend the flames.  We tuck our prayers into the wood and watch them rise in delicate smoke swirling and disappearing into the night.  Chanting, clapping women.  Women I have grown to love over the last week.  Brave women who are willing to lay themselves bare in a community of healing.  Re-Membering ourselves through story.  This is what was meant by tearing your heart out in sacrifice at the pyramids.  It wasn’t to warlike gods or to subjugate hostile enemies, or a show of force of powerful men lording over the weak.  They’ve corrupted the story!  Under that rubble, in the dark, lies the underworld, female creation deities waiting.  Teotihuacan Spider Woman.  Coatlicue, mother of all the gods & her skirt of snakes.  Jaguar.  The re-emergence of the feminine has already begun.  We are no longer bowing our heads, but rising up bare arms, palms open to the sky.  In unity we join hands and walk the coals feeling nothing because we have become the fire.

Posted by Esperanza Rising at 10:07 AM