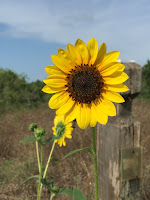 I arrived earlier than planned to Guadalupe Mountains.  Followed a winding road and set up my tent.  Pounded in stakes, rock against rock, hard and unyielding.  I filled up my two water bottles, and packed my pockets with trail mix, jerky and a cheese stick.  After orienting myself with the pocket map the ranger gave me, I directed myself to the Guadalupe Peak trailhead.  I subtly acknowledged a few fellow hikers milling about, some restless teenagers with their parents, a serious wilderness couple and some runners.  But they veered off to other trails before long, and I was alone with the heat, the stones and the dirt.  Just a few scurrying critters to keep me company and the majestic yucca cutting slices into the sky.  So I greeted the tiny cactus blooms, crouching down low to get a magnified look at their tissue paper petals surrounded by sharp thorns.  I marveled at their uniqueness, their resilience, the audacity of their delicate beauty.  I busied myself trying to capture the stark shadows and intense color with my camera. 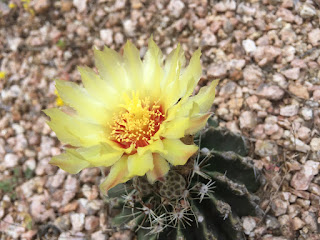 But as I wound around and up the mountain, I became more obsessed with the seemingly endless zigzag of the path and it’s teasing meandering.  The details faded and I got lost in the endless horizon stretching impossibly in the distance.  I played a game with myself trying to guess which way the trail would turn next and how far until I finally reached the top.  But I was repeatedly humbled by my inability to predict its mysterious pattern.  And each “summit” was but a mere stepping-stone for the next. 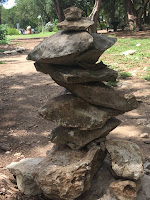 Several hours in, my heart leapt at the sound of voices coming towards me, but when they appeared I saw it was a huddle of experienced adventurers with their firm muscles, sun leather skin, and scuffed hiking boots.  I found myself too intimidated to interrupt their heated conversation with more than a nod as I feigned confidence and plunged determinedly ahead.  But as the sun blazed overhead and the water sloshed light in my last bottle, I began kicking myself for the impertinence of my ego.  Why didn’t I at least ask how much farther to the top?  My calves burned with each incline and my mouth was cotton as repeated admonishments about hiking alone ran on loop in my brain.  Sweat slipped between my breasts, and my t-shirt plastered itself to my skin, thin and drenched.  Blisters rubbed raw against my boots like pebbles. So I sang softly to reassure myself and lose my damning thoughts in the mesmerizing switchbacks stitching up the mountain.

When I finally I snapped out of my daze, I saw an arrow pointing to the summit and broke into an awkward lope.  Standing finally at the top with the wilderness unfolding as if I were stepping into a painting, I felt a rush well worth the climb.  All the insecurity and doubt drained out of me as I huddled in the sliver of shade provided by a small metal monument proudly declaring “tallest peak in Texas.” 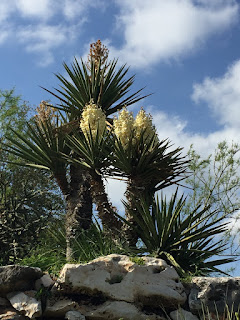 It was then that I saw it.  A flash of light in my periphery out west.  I turned and saw the thunderstorm threatening off in the horizon.  Heavy and ominous, jagged bolts of lightening ripping through the darkened sky.  And just as it registered that there was not a worse place in Texas to be at that moment, my feet were already up and carrying me by leaps and bounds down the steep slope I had so recently trudged cautiously up.  My body mutinied against my more methodical mind, and took over.  I could hear the crunch of pebbles under my boots, slipped and found myself sliding down rocky turns on my ass, skidding with scraped palms splayed to slow the fall.  The sky inky grey like a fabric hastily thrown over a lampshade.  Colors hushed and the breeze suddenly moist sifting through my salty hair.  My lungs were burning but I could not stop.  Though my legs trembled with the impact of each pounding step, I was lost in the momentum.  Before I knew it, I was rounding the last turn and saw the landscape roll out before me like a carpet, my campsite at last in view in the distance.  My strides lengthened into a sprint, leaping clumps of grass and stones as hail the size of golf balls bounced absurdly off my head.  Laughing hysterically, tears streaming down my face, I at last dove headfirst into my tent and sprawled spread eagle across the bottom, as jagged stones jabbed into my back.  Just a thin fabric separated me from the world outside.  But as the wind rocked me to and fro I surrendered my life to the night and swayed to my own West Texas lullaby.
Posted by Esperanza Rising at 6:58 PM