Staring in the mirror at my family collapsing,
crumbling into sharp
edged
chunks
and clinking like shattered glass around my feet.
Privileges squandered, gifts too easily given.
Yet fists still cling to some imagined scarcity.
Closed tight and delusional, as thin as air.
Still demanding more like some drug crazed addict.

I say it’s time.
Time to let the house burn down!
Time to let the light stream through.
True strength is saying enough when you’re already sucked dry.
What more can you possibly want?
You’ve already siphoned our life breath
like a vacuum into your emptiness.  And for what?
You lift not even a finger to save yourself.
Easy to sacrifice the rest of us as we carefully teeter on the knife-edge of our lives.
Struggling to survive,
keeping our own ships afloat.
Bleeding,
sweating,
crying,
but carrying on.

Now it’s time to back off.
I’m breaking this cycle!
I want something REAL to pass down to my children.
Flesh and blood, skinned kneed resilience.
And not the hold-your-breath kind.
Not these blurry shadows,
these shape shifters flitting past our windows at night,
afraid of the lightning strike.
But the open-the-windows-and-let-the-rain-in-kind.
The cry and cuss but get
back
up
kind.
The watch-this-rising-phoenix-breathe-ashes-back-to-life kind.

If you knew love,
you wouldn’t question me.
You’d just know,
deep down in your cells,
you’d know.
Ya, I’m here.
Got your back in the dark.
But only if you’re making an effort to stand on your own goddamn feet.
Don’t fucking expect me to carry you!
I’ve got enough weight on my own
and a stress fracture to prove it.
Yet I’m still out here running, tears streaming, chest heaving.
So get the fuck off your ass and throw a goddam foot forward.
Stop bitching and howl.
Gut wrenching and alive.

Who told you life is easy?
It’s hard and gets gritty.
You have to be tough.
It’s not an option.

You don’t think I know pain?
Ruptured tendon.
Open lung biopsy.
Pinched disk on my wedding night.
Flying from DF to Austin with a collapsed lung.
Driving myself over an international border to the emergency room.
Working in a foreign country with 104 temperature and a baby strapped to my chest.
Passing out like a felled tree on the cold tile floor surrounded by strangers.
My unborn child buried in the mountains of Oaxaca.
C section barely sealed,
sleep deprived,
nipples cracked and bleeding
yet gritting my teeth to offer them again and again to a crying baby.
Setting a match to my own marriage
to save myself, my children…

Ya, I’m stopping this cycle.

And I’m too damn grateful to give up now.
I will stand,
shoulders thrown back and laugh,
filling these battered lungs.
I will blaze a new path for my children to follow,
throw them off the scent of this dead end street.

This is not love.

This is tissue paper thin ego, pounding its chest.
Looks big but rips up close.
It’s frail and fragile to the touch.
So I may be exhausted,
but no amount of shaking will free these roots.
They sink deep, tapped into another source you’ve yet to find.
So I’ll fan the flames as the house burns.
Close my eyes and let them lap up higher and higher
to see over your bull shit,
past the fear and smoke to an open sky.

So if you really care,


meet me there.
Posted by Esperanza Rising at 9:31 AM No comments:

It’s terrifying to meet yourself on the road bruised and battered, no good Samaritan to take you to the inn and bandage your wounds.  No reflections, no disguises, no explanations.  There’s a futility in thinking we’ll ever figure it out.  It’s the story of the blind men and the elephant.  One thinks God’s a tree trunk, one a snake or rope depending on where they stand.  But if you see the Buddha on the road, kill him.  I believe we can only get closer.  Because if you think you’ve already reached it, labeled it, written it down in some book, you can know for damn sure you’re farther away than ever.  Just smash the idols and start over.

I am a fucking mountain not because I’m invincible or without doubt but because I am fully aware of my faults and weaknesses.  I look them in the face every day.  And we’ve learned to do a little tango together.  At first staring each other down as we clap and stomp in threatening circles, popping a jab when we think the other is not looking.  But eventually we always end up holding each other in a loving embrace.

We are what we are because of each other. 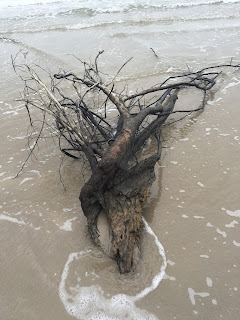 Like driftwood.  Uprooted, battered and thrashed against the riverbank.  Carried in the current, rushing toward the roar of the fall, spinning eddies make us smooth.  There’s character in the grains, the gashes, the knots.  A hollow bone fills with air.  It’s the empty vessel that carries water.  Unencumbered.  Untethered.  Buoyant: bobbing back up to the surface every time it gets pushed under.  Resisting the density.

Cause I’m no longer afraid of the free fall.  I’ve learned to listen for the ruffle of feathers in the rushing wind to remind me that this is what it feels like to fly.

And instead of always skimming across the surface on thin legs like an insect, I dive deep beneath the surface and glide through the water.  Grow gills.  Chase out the carbon dioxide to clear the haze.  Make room for the oxygen to fill my cells until they’re plump and ripe like fruit ready to be picked and popped in someone’s mouth, savoring not just surviving.  Sharpening my senses.  Like tuning to a station after too much static.

Demons.  We all have them.  They ooze through the window panes and under the door.  So I’ve learned to suck the venom and spit it out before it has time to course through my veins.  Just cut straight to baring my soul and let the pain breathe raw, sit with the sadness, the disappointment.  But also see the edges shimmering with life, light bursting from the cracks, thrusting me through time.  I keep god laughing by telling her my plans.

So thank you, for cracking the shell, exposing the illusion of strength hovering in the fortress.  You wrenched my heart open, tilling the soil until it was fertile enough to bring new life into this world.  Opened me back up to the universe.  Each time I break, I’m a little more free.  Burning muscles mean change.  You have to break the tissue down before you build it back up.  Like compost.  Or the way heat brings out flavor in the oven.

So I place my trembling hands back on the potter’s wheel.  Hold my hands strong, let my long fingers curve around the clay, wet and supple. Feel the centrifugal force press against them.  Arms tired.  Eyes steady.

There are no right choices, just right NOW.

Posted by Esperanza Rising at 6:16 PM No comments: