I watched you die slowly. 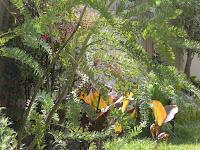 Forced to bear witness,
as the life was sucked from your delicate branches,
a helpless spectator as your shiny silver blades
turned brittle and brown.
One by one the limbs were infected,
amber droplets oozed
sap rushed to soothe the cuts
but nothing could heal the fatal wound
that happened when no one was watching.
No compost or care could mend this turn of fate.
A skirt of rust lay scattered and lifeless on the ground.

One day I knew the battle was over.
Accepted the rich humus would become fertile soil
for the next set of roots to sink their fingers into.
Bowed to nature’s incessant drive to recycle,
the wisdom of oxygen and worms.
Even our own cells are slowly replacing themselves
until we are no longer the same as before.

Musing on the 52 year cycle of the Aztecs,
a revolving world requiring constant sacrifice and rebirth,
I solemnly fetched the saw from the dark tomb of the garage.
Hot tears streamed down my face
as I said a prayer and chopped you down.
My heart ached watching your upturned arms
tumble with a thud to the ground.
I felt the reverberation beneath my feet,
and sensed the unrelenting march of time.

And when it was over,
I just sat there stunned,
staring at the empty space you left.
Yearned for the protection of your elegant, arching branches
cutting shadow shapes against the endless blue of the sky.
Your roots once anchored me,
held me snug against the earth.
Now I float like a dandelion,
dancing weightless in the breeze,
looking for rich soil to scatter my seed.
Posted by Esperanza Rising at 11:51 AM No comments: 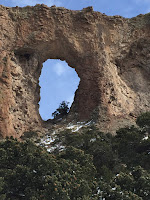 Soft cotton candy clouds lift my eyes to the sky
open a pathway above me
untethered
so I can feel the space between the atoms
light as air
kindred spirits calling me
to ride the song of birds
out of my skin
let go of gravity pulling down on me
become the laugh,
the moment of ecstasy
back arched
chest bare
heart pounding.

There is nothing else but this.
Posted by Esperanza Rising at 10:47 AM No comments: 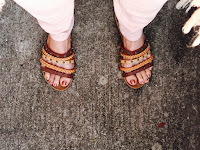 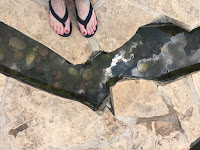 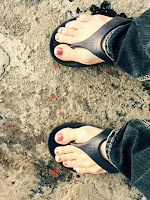 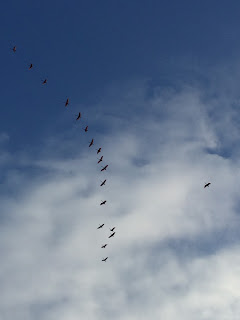 There are ghosts all around me.
Wings of angels flutter against my skin-
tissue paper butterflies reminding me you are still here.
A salty wave of joy washes over me
melting dream to reality.
I cringe at the familiar prick of pain,
bleeding watercolors, jagged lines.
Suddenly I’m aware of the helpless gesture of my hand
cradling my belly,
uneasy home of both womb and tomb.
Desperate, I search for signs of your footprints around me,
and my eyes fall on the subtle sway
of an empty rocking chair on the porch.
I lift my eyes yearning for clues in the shapes of clouds
but a shrill birdcall shatters the moment,
seizes my heart strings
and cinches it closed.
With a gasp, all the world draws tight,
crystalized in an unspoken scream-
“I’m sorry I couldn’t protect you!”
and then dissolves…

With a cough you left me, so tiny and unprepared.  I would have held my breath if I had known!  Clenched my jaw, squeezed tight and locked down the door to the unwanted future of an abandoned mother.

You were sneaky not to tell me.  Forcing me back to life.  But sometimes I feel it is I who died.  That your visits are to me in some unreal time.  Somewhere you are growing up and wondering who your mother was.  Maybe you see the empty rocker move and muse whether I am still with you…and write a poem to me, your guardian angel.

Posted by Esperanza Rising at 7:20 PM No comments: 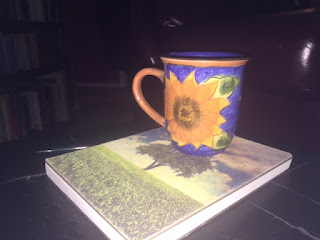 She loves the crunch of the grounds as she counts out the scoops of coffee.  The bitter aroma wakes up her senses as it wafts up from the thick glass container she unlocks with a satisfying click.  Her pores open up as if to soak in every aspect of this gift: the darkness, the quiet, the morning.  The whole day is placed temporarily on hold, waiting eagerly right around the corner with the tip hinged delicately on her. Balanced precariously on the edge of the next tap.

Nothing else waits for her.  Not the alarm attached firmly to her wrist that rips her from sleep at 5:00 each morning and sends her pounding heart into her throat.  Not the vague sense of nausea as she debates the prism of ways she could handle various disputes at work nor the finality of having to deal with them.  Not the bound up angst of 75 teenage bodies waiting in their desks at school each day looking to her for direction.  Nor her own small children with their endless demands for attention both adorable and exhausting: disarming smiles, sibling arguments, late night glasses of water, the thousand and one tiny decisions, bumped heads, stubbed toes, and small rebellions.

When she closes her eyes she can still see the determined face of her daughter learning to swim last summer, feeling the responsibility of knowing she can’t look away even for a second as her youngest pushes off the wall even though the water calls her to glide on her back eyes to the vast summer blue sky or stretch her arms out in a powerful stroke, bubbles massaging her face under water all gurgles, the world muffled somewhere on the surface.   Then she flashes to the panic of her son resisting the freedom of a bicycle without training wheels, all sobs and furrowed brow, knowing she can’t let go of his bike no matter how much she wants to.  Even the joy of watching them learn the stride of a horse under them, reining the powerful animal to the left and the right.  Trot 2 beats, lope 3.  Even then she can’t seem to pull her eyes from watching their hypnotizing rhythm, all new and unfolding.  She doesn’t want to miss anything.

But this moment, this is stolen time, their sleepy little eyes are still dreaming, having quietly crawled into their king-size bed when they thought she was sleeping.  They are still cuddled safe and warm against their father’s side allowing her to sneak tip-toe to the kitchen and breathe in the space around her, reveling in the luxurious feeling of her lungs filling with air and consciously exhaling the to-do lists on the other side of that first cup of coffee.

Gone are the days of diaper changes and a limp breast still hanging loose from her sleep shirt after the first morning feeding, as she stumbled one foot sloppily thrown in front of the other down the hall groggy but reeled to the kitchen by the enticing call and guilty pleasure of a sip of caffeine with time for it to run its course through her veins before the next feeding.  That sense of her body no longer being her own but rather transformed into a vehicle for someone else’s survival never quite left her.  There is only a faint memory of eating and drinking just for herself, for pleasure or boredom, deciding what to consume based entirely on her own needs and desires.

Even now she still hasn’t quite shaken the feeling that her body is somehow not fully hers, though she is starting to see the outline of it slowly curving back out like a statue released from stone.  She finally fits in the clothes that remind her of herself again and she is genuinely surprised to recognize the reflection she occasionally catches in a mirror or a passing window pane.

But her life remains frustratingly out of reach.  There are so many variables before she can even run out the door for a jog or get together for some much needed communion of wine with friends.  The barrier of her skin is no longer the border it once was.  She is not sure if it will ever fully come back, her sense of I having melted indistinguishably into a we.  Even when they are not swirling about her legs at a party, she catches herself including them like a phantom limb as she bids farewell thanking the host for inviting us.  She still struggles to rediscover where she fits in these whirlwind days as she squints into the blinding light that has just started beaconing her into the second half of life.

With the gurgle of percolating water promising a warm ritual in just minutes, she eagerly lights a candle and grabs her journal with a deep yearning for a few moments of solitude, a quiet meditation, even five minutes before the day sweeps in.  Exhaling as she snuggles into the receptive comfort of the sofa, she opens to the first page as if it were a sacred text, running her finger down the blank page like a prayer.

Then out of the darkness a familiar shape takes form rubbing sleepy eyes and stepping into the lamp light: “Good morning, Mami!”  And with those sweet words life presses play and the seconds begin to click by like the clip clop of a horse.  Breakfasts to make, lunches to prepare, lessons to plan.  The pressure of the day rises suddenly to the surface, bubbling in her chest like carbonated water.  Inhaling together they fall into a carefully choreographed dance moving through all the micro moments that launch them into their day as directives begin to flow unbidden from her mouth: brush your teeth, get dressed, eat up, don’t forget your backpack!  She grabs her water bottle and work computer, feels the weight of it strain the muscles in her neck.  Shuffling her son out the door as the sound of the garage door hums, she glances at the clock, still time to catch the bus, a small victory… then out of the corner of her eye, she sees the groggy softness of her daughter woken by the commotion and her heart skips.  Will it be a sweet hug goodbye and a touching wave or the suction cup cling that requires a desperate call to wake her father from his sleep and peel her little warm frame off of her own now tense body as she drags herself into the day?  She remembers to breathe as she kneels down and indulges in a tight squeeze from her daughter’s small but powerful arms.  Allows herself a moment of surrender.  But the clock looms large.

Now they are officially late.  She braces herself for tears as she severs herself with a firm but loving goodbye hiding her own salty tears as she rushes her eldest out the door.  Again the decrees tumble out of her mouth.  Quick!  Belt on?  Buckle up!  Shoes on?  Jacket?  She pulls out into the still dark morning.  Her four year old’s gut wrenching cry still rings in her ears, rattling her heart off beat.  The empty feeling in her belly from those lost 5 minutes extracting her daughter from her side makes her feel ungrounded, dizzy.  Her knuckles are white on the steering wheel and her shoulders tight between her ears as she visualizes the bus pulling away before she can get there.  A list of today’s expectations dribble out of her waking mind.  The crisp blank page of her journal already a faint memory.  It is then that she remembers longingly the methodical crunch of the coffee grounds and the steaming cup of coffee she left sitting on the counter.

Posted by Esperanza Rising at 7:13 PM No comments: