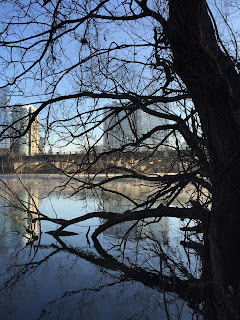 There’s just enough light for one more lap around the lake she muses vaguely to herself.  Feeling strong, she savors the way her muscles flex and hold her as her feet land firmly on the ground.  A smile sweeps across her face as she quietly greets familiar strangers passing by.  A breeze provides a luxurious pause from the Texas summer heat.  A song fills her mind, and she laughs to realize she is singing out loud and not just to herself.

Crossing the Mopac bridge, she falls naturally into her latest ritual.  A look left toward the sprawling city acknowledging her past and with a slow turn of her head to the right, she watches her future disappear tantalizingly around the bend.  The excitement of that catches in her throat.  She loves the sound of her footsteps on the long metal bridge, as cars rush by on an endless treadmill up above.  She shares a suspended moment over the water, a runner’s community acknowledged with knowing nods.  The setting sun fills her with contentment and a solid sense of accomplishment as she finishes her 2nd full lap.  Suddenly she senses that she has one more left in her and finds her feet carrying her back over the 1st street bridge and steering her around once again.  She’s never done a third lap, but 13 miles feels right tonight, a half marathon.  She softens her eyes and sinks into the rhythm of her body.  Her swinging arms allow her full 120 pounds to rock efficiently back and forth evenly distributed and sleek.

Opening her eyes she is suddenly aware that the sun has set.  She has the panic of biking home before dark as a kid.  Feeling mom waiting impatiently with dinner on the table as the illusion of time makes the sun sink fast once it hits the horizon.  She winces slightly as she realizes some of the bends ahead are now fully shaded.  Picking up the pace, she concentrates more on the time in the air than the time on the ground.  Crossing the bridge for the third time, she is conscious of the difference she feels in her body crossing it alone.  A dark foreboding creeps along her skin when she looks off around the bend to the right.  On the backside of the loop, she is grateful for a bright stretch and slows slightly to enjoy it, letting her breathing even out.  She inhales the scent of wisteria growing thick over the gazebo as she curves smoothly around the next bend.  Her muscles are heavy but like a horse heading to the barn they are locked resolutely into the homeward stretch.  She blinks away the sweat from her eyes as the thud of her feet rock the little wooden bridge faintly over the cove, all the ducks already tucked safely in their nests.

An immense blackness has settled around her as she nears the end of her run with a vague sense of relief.  But the path up ahead is still dark and inky.  She picks up the pace slightly and feels the weight of that last lap catch up to her.  Her thoughts are fragmented as she remembers the day she helped clean the trail and found a stash of used needles just down the bank from this section of the path.  Someone’s pain discretely hidden in the roots of the wise and wispy bald cypress rising up out of the water.  This trail has always been a healing place for her, symbolized her gradual recovery and persistent clinging to life.  She shivers at the stark contrast.  She had never considered that others might come here with any other motive.


That’s when she sees it.  Doubting herself at first, she keeps a steady eye on the trees and is able to catch the choppy motion as the branches shift a second time just as a menacing shadow takes shape behind her as she rounds the corner.  Suddenly aware she hasn’t seen anyone in the last 30 minutes, the presence rattles her.  Glancing over her shoulder, she sees him.  This is not a runner.  She’s had enough experience to know the look in his eyes.  She met it once in a Spanish park when she was 16 and innocent and again as a more mature adult when the Rainy Street biker threw his bike to the ground and tried to bolt inside her home as she ran from door to door sliding the locks just as he hit the peeling paint of the wood outside.

Making quick calculations in her head she knows there’s no light on this part of the trail and no exit from here to the Lamar Street bridge.  Adrenaline surges through her muscles.  Her inner warrior takes over, barking commands like a drill sergeant, “Push!”  Shaking the web of exhaustion from her mind, she feels tiny daggers strike like stinging needles in her chest as she tries to nudge fear to the distant periphery of her mind but it dangles there, a nuisance.  She digs in.  The strength in her arms lifting her body higher off the ground with each swing.  Every inch of her taut, she stretches out her stride as much as her 5’3” frame will allow.  Shoving the air forcefully out of her lungs frees up space for each intake of breath.  The sound of her exhale accents the pounding rhythm of her heart in her ears, and her legs drive her forward to the beat.  She’s learned her lesson well.  Riding the wave of her own momentum, she feels the distance between her and the dark shadow lengthen.  He’s losing interest and eventually fades back into the darkness from where he had emerged.  She allows herself a grin remembering something she had heard once about cheetahs but can’t quite remember what.  Just then she sees a beaten path up a muddy incline.  The light of the streetlamps flashes like a beacon between the lacy leaves of the oak trees.  She harnesses her body’s built up momentum to carry her up the slope.  She bursts onto street level as if from another dimension, and her brain snags trying to process the image of people chatting calmly together as they wait at the cross walk so far from the danger she has so narrowly escaped just a few yards below.
Posted by Esperanza Rising at 10:21 AM