I named her Ariana.  She trailed me like a shadow and whispered in my ear whenever I strayed from her side.  She pointed out the jagged edges, steered me from the glass and uncovered electrical sockets the way a mother instantly childproofs a room with a laser sharp eye before entering with an inquisitive toddler.  She fed me consistent reminders of past mistakes and failures, or punched me in the gut when subtlety didn’t work.  Ariana, like an angry Greek Goddess, had an endless supply of weapons in her arsenal.  Arrows she would pull gracefully from her back and shoot images that exploded in the air: me by the side of a pool gasping for breath after an asthma attack when I hit the cold water at my first swim meet or being pulled from the waves by a stranger when I had wandered too far out in the ocean.  There was the time I could have been washed off the smooth water-slick rock if I hadn’t headed back to the more frequented trail just as the rain began to fall.  Or the hail bouncing off my head as I ran down Guadalupe peak after hiking alone in the desert with just an empty bottle of water left in my hand and that night spread-eagle on the floor of my tent so I would not blow away in the storm.  And then there are the more recent, fresh wounds like the image of my husband and I standing, shivering before the cold glare of an indifferent immigration officer in Juarez riffling through our papers, the thick story of our life in his callused hands.  Time slowed to a groggy crawl as we clutched each other’s hands and watched in disbelief as his mouth formed the word NO.  I can still feel the stone sinking sensation in my belly as he discarded our dreams of being together and then casually switch the light on for the next hopeful couple to take our place.  With heaving chests and wet faces, we had no choice but to drag ourselves cowed and defeated from the fight.

My stomach cinches tight with each memory, and I bow my head submissively.  I’m easily herded back to safer ground: skirting around the joy to avoid the weight of the sadness that follows.  It always does, you know.  And I grit my teeth to prepare for it.  Clench my stomach muscles like I learned in ju jitsu before a blow.  Learned to slap the mat as I fell and hit the floor.  Never drop your block, never let your enemy too close.  Only, everyone eventually resembles an enemy after a while.  The dearest ones are actually the most risky.  So before I knew it Ariana had become my only companion.  Everyone else was kept at arm’s length so I would have time to react, time to prepare an escape route.  And my roaming range gradually shrunk to a tight circle that Ariana patrolled with a stern fist.  The boundary of which would win me a swift tug on the leash and I would return like a well-trained dog to hover by her side. 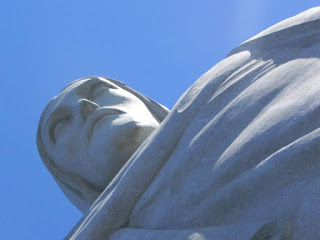 But now she is gone.  I left her at the feet of el Cristo in Rio de Janeiro.  High over the ocean.  Me standing mesmerized by the frigate birds soaring overhead.  The famed savior’s arms outstretched to the horizon, stone body rising up out of the earth.  A towering sentinel with the surrounding mountains bowing to his massive feet.  Compassionate eyes gazing downward, he drew her close and pressed her protectively to his chest, a fierce crone transformed into a frightened child as she trembled in his arms.  "She doesn’t need you anymore.  Go."  Not knowing if he was talking to me or to her I was sure there was no turning back.  I felt her spirit leave me like a slap on the back that knocks the air out.  I stood stunned for a minute and then bowed my head and thanked her for her years of loyalty and concern. 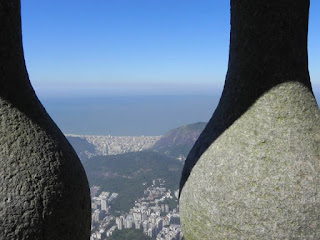 I imagined walking down those winding steps without her.  The sting of tears in a crowd of tourists.  My brother waiting in the gift shop below with the kids.  It was time.  I kneeled and took in the incredible view through the carved belly of the railing.  One last glance.
A taste of salt in the air.
Inhale, exhale.
And I let her go.
Posted by Esperanza Rising at 12:07 PM